It is difficult to ignore the hand-pulled ferry boat which rests outside the Saracen’s Head Inn, but what’s its history, and is it merely a tourist attraction or is this little mode of transport still invaluable part of local life?

The ferry at the Saracens is one of two hand-pulled ferries on this short stretch of the River Wye, the ferries at Symond’s Yat are enshrined in locally history and they make up a traditional way of life.

Travel back in time to 1800, and the Wye was a busy place for industry, it also posed a potential barrier between the two sides of the river, and this is a river that has always commanded respect with many losing their lives when swimming or attempting to cross. An interesting 19th century child’s gravestone at St Margaret’s Church, Welsh Bicknor is testament to the dangers of the Wye. It describes cause of death by drowning in the river, locals will have more recent memories of such tragic stories. 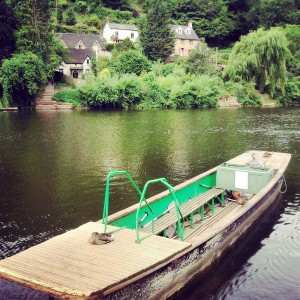 During the early 19th century, there were 25 hand ferries between Ross and Chepstow, many of which were similar to the present day Saracen’s ferry.

It is thought by historians that the ferries were introduced in Roman Times to link the forts of the Doward and the Yat. They have certainly served Military, Civilian, Tourist and Horse traffic since this era.

The ferry outside the Saracens is a hand pull cable ferry. The ferryman uses the overhead tensioned cable which is connected to the boat by a rope, this is to prevent the boat from drifting down stream should the ferryman lose control of the boat, which is what is what apparently happened many years ago with the boat drifting down to the rapids. Health and safety is far more stringent these days.

While the ferry appeals to tourists, it is still today a very useful and important part of local life for those wishing to travel between Symonds Yat East and West. The only connection by road is upstream over Huntsham bridge (a five-mile trip). By foot the other option is a three mile round-trip walk down to the Biblins suspension bridge and back. The suspension bridge was built in 1957.

The ferry has been captured in a lovely article by Melissa Mouchemore:

Warm, still, overcast – my favourite summer weather – and a rare solitary weekend escape. The river languid and glassy, cumulonimbus woodlands rolling up towards the 500ft crag of Symonds Yat. Nothing to do but drink coffee on the terrace of the Saracens Head Inn and watch, as the sign near the pub calls it, the Ancient Hand Ferry. PERFECT. 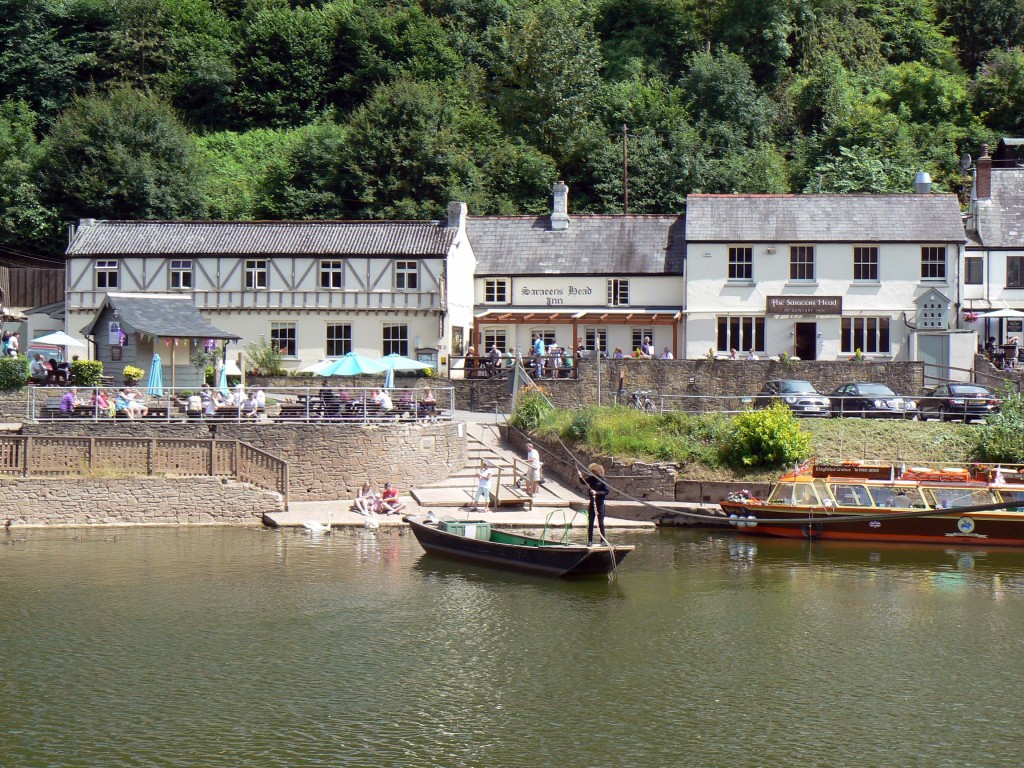 Of all the ferry men who operated the Saracen’s Head ferry in recent years, Andy Gardener or ‘Animal’ as he was known affectionately by locals, was by far the most colourful and entertaining.

Andy would take the boat to the middle of the river and sing to the bemused customers of the pub on the terraces, but by the end of the day he would be back inside drinking and sharing stories with tourists, not to mention his arm wrestling challenges. A kind and gentle man, a commemorative plaque rests on the wall by the ferry steps.

High river levels in winter prevent the ferry from being used, but for most of the year, this buoyant little river shuttle carries literally thousands of people, animals and bicycles back and forth, for a small charge which goes towards the maintenance and wages of those who pull the ferry. Whether it’s to collect a lone hiker or the constant stream of tourists on a sunny bank holiday, the Saracen’s Head Inn ensure this bit of ancient history remains in place for both tourists and locals.

That clinking of chains is now part of Symonds Yat life, and for some, the songs and laughter of Andy Gardener can still be heard drifting up the Yat gorge on still summer eves. 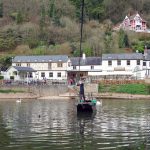 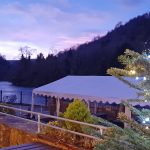 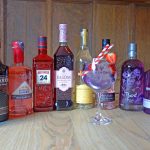 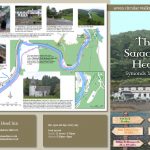 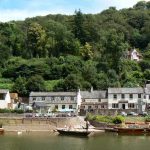